Windows Phone 7 is new platform of Windows Mobile, built from scratch by Microsoft. During the Mobile World Congress 2010, Microsoft revealed details of Windows Phone 7 for the first time and it is planned for release by Christmas 2010.

Customers want a simpler way to say and use the name consistently. The important thing is keeping the focus on the Windows Phone brand, which we introduced in October and will continue investing in through Windows Phone 7 and beyond. 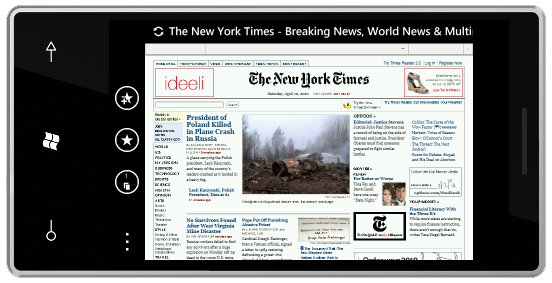 The UI of Windows Phone 7 is internally codenamed “Metro” and seems inspired by Zune HD including 3D effects and transition animations. The UI has been completely re-designed and organizes content in “tiles” format. The Metro UI ideally good UI design and provides easy navigation, ease of access to all mobile features, while interacting with the applications. The UI is much clear and straightforward that encourages usage of applications.

At MIX 10, Microsoft revealed the hardware requirements for Windows Phone 7 devices, as shown below-

Not all devices are upgradable to Windows Phone 7 and it depends upon device o device. No mobile phone in the market available, that meets the hardware requirement. WP4 has been re-designed and developed from scratch, so there is no legacy for Windows Mobile 6.0/6.1/6.5 and none of earlier release can be upgraded to WP7.

Windows Phone 7 brings the new opportunities for Developers. Here is the list of primary tools to develop applications for WP7-

Visual Studio 2010 Express CTP is exclusively targeted for Windows Phone 7 and will continue be CTP right now. It has different Life Cycle than regular VS2010 release. All applications of WP7 are written in managed code and C# is the only supported programming language now. Programs are developed in Microsoft Visual Studio 2010 Express for Windows Phone, which includes XNA Game Studio and access to an on-screen phone emulator. You can develop visuals for Silverlight application using Microsoft Expression Blend 4 Beta.

So what do say about the newest mobile platform from Microsoft. The countdown has already begun… Lets see “Will Windows Phone 7 prove itself and bring new edge of mobile computing?”