A month ago, Windows 7 has been made available for consumers and as reports say “Windows 7 is doing well and Windows 7 sale has become more than twice of earlier version of Windows sold ever.” With the grand success of Windows 7 release, Microsoft has started working on next iteration, that is codenamed “Windows 8”.

The blog Microsoft Kitchen has posted Windows Roadmap slides shown by Microsoft during PDC 2009 in Los Angeles. It indicates, Microsoft has scheduled the next major release of upcoming Windows in 2012. 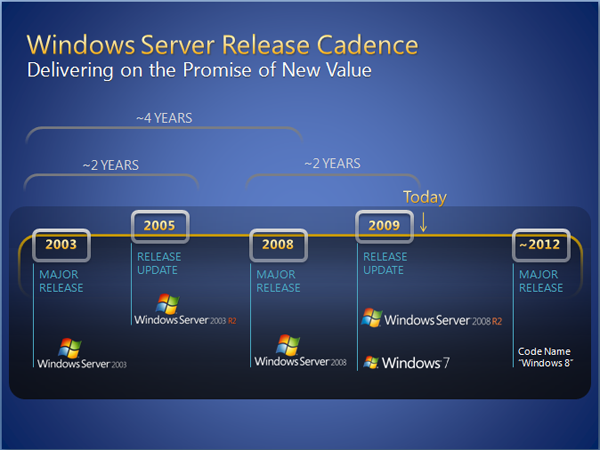 Microsoft didn’t reveal any information about Windows 8 yet, but the gap between Windows 7 (Release Update) and Code Name “Windows 8” would be approximate three years and we can expect next Windows operating system in late 2012.

How Exciting??? Mayan calendar ending in 2012, which predicts the “End of the World” in late 2012. but its just matter of facts, therefore we are hopping for the best and we’ll see the next generation operating system by Microsoft.