Nowadays, The fastest involving part of computer technology is Web and its standards. Most of the web browsers are incorporating with new web standards and including support for HTML5 and CSS3 to enrich web experience to next level. Whereas the Web professionals are being readied to build web contents based on HTML5 and CSS3, but still looking for a quick start.

Microsoft to release Visual Studio 2010 SP1 incorporates HTML5 and CSS3. The entire HTML5 specification is not supported but most of the new elements and attributes are, which means you get both intellisense and validation for HTML5 with SP1. 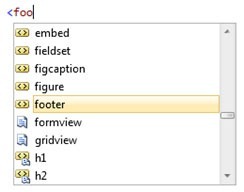 In Visual Studio 2010 SP1, There are a few improvements in the CSS3 support as well, though not as elaborated as with HTML5. The editor now supports the more advanced selectors such as div:nth-child(2n+1) without giving validation errors and the new color values rgba, hsl, hsla and 8 digit hex values are also supported.