Today I have reviewed a powerful and easy to use screensaver authoring tool, Axialis Screensaver Producer. Recently AXIALIS Software has released its v4.0, that is fully compatible with Windows XP, Windows Vista and Windows 7.

Using Axialis Screensaver Producer, you can create any kind of screensavers and it can include Flash, Pictures, Video Clips and other animated objects & all can be done with few clicks or by following some easy wizards. It also offers built-in samples of all kind of screensavers; Company Presentation (Flash), Slogans, US Flag (Video), Wilbur Yoyo Game are few of them. 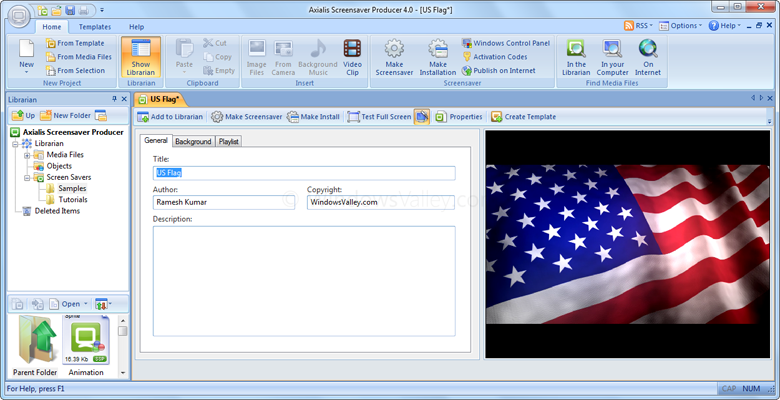 The features and facts, that attract me are:

Screensaver Producer has embraced Ribbon UI, where all controls are placed are visible and easy to access & categorized in three tabs. viz: Home, Templates and Help. It also supports multi-document support, that make easy to manage all stuff. Compilation Wizards also helps you create screensavers in seconds. In sort: its a powerful screensaver authoring tool with ease of access.

It allows to create variety of screensavers with different type of content. You can easily create screensavers based on sprites (animated objects), pictures, flash movie, video clips.

You can easily make installer(EXE) for compiled screensavers(SCR), that could be demo and trial versions of screensavers. You can change the trial period delay and set your own messages of trail version. The screensaver can be unlocked. Therefore interested users can purchase a code to unlock it and you can generate or manage unlock codes using a powerful built-in feature.

Plug-in for Adobe Photoshop and Illustrator:

It comes with plug-in for Adobe Photoshop and Illustrator, you can install them by clicking on main button and choose Install >> Adobe Photoshop or Adobe Illustrator. These plugins permit transferring your images directly to Axialis Screensaver Producer without creating temporary files.

Once you are done, you can preview the screensaver on workspace. Beside it, you easily test your project in full screen mode. That really makes the sense, “How will it go?”

The most interesting thing has come to picture, its Licensing Scheme. You pay for the program only once and get all new versions of this program for FREE and for lifetime. If you’ve already purchased a previous version of Screensaver Producer, you’re entitled for a free upgrade to v4.0. The earlier Personal Edition does not exist anymore. As a result, if you update from previous edition, you’re automatically upgraded to the Professional edition and your product key remains the same.

So you must register the product to get LIFETIME FREE UPGRADES. You can download a full-featured 30-Day trail from here. Download Screensaver Producer v4.0