According to the Microsoft Malware Protection Center, in addition to providing a no-cost security solution to tens of millions of customers that may not have been actively protected before, Microsoft Security Essentials detected nearly 400 million threats over the past year, with customers choosing to remove more than 366 million of those threats. It is advise to use Microsoft Security Essentials, if you don’t want to spend bucks on any security solutions. In short you must try it, instead of using pirated or counterfeited copy of any paid AV package. 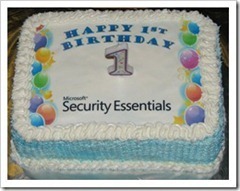