Do you worry about your important data?

Then the post is worth for you. Today we are focusing on Backup and Restore feature of Windows 7. The feature has been totally re-furnished and much easier to take backup of your important data and schedule the backup task.

The Backup and Restore has total four methods to take backup and restore data and recover from data damage as following:

System Restore: The most general method, in which Restore Points (Checkpoints) are created automatically when you install/uninstall programs and after a certain period of time. You can also create such checkpoints manually, when doing some task that changes system settings. These checkpoints are restored and help to revert back to working state?

Previous Versions: These are cached copies of files and folders that are saved automatically  as part of system protection. You can revert to previous versions of files or folders that accidentally modified or deleted, or damaged. 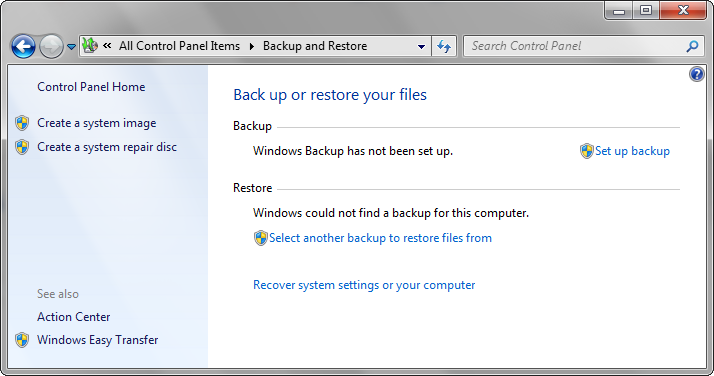 File Backup: It backups your data files saved libraries, desktop and other default Windows folders. File Backup also creates a system image, that can be used to restore all data if it stop working or Windows is unbootable. Apart from all these, you can schedule the the backup task. After it, all items will be backed up and will created system image on a regular schedule. You can select or choose individual items and save the backup to physical disk, UFD(USB flash drives) and network locations as well.

How to configure Windows Backup and schedule it.

System Image: It is is an exact image of a drive that includes Windows and system settings, programs, and files. The system image can be used to restore the contents of computer if hard drive or computer ever stops working. It provides complete restoration, so we can’t choose individual items to restore, and all of current programs, system settings, and files are replaced. Beside it, we can manually include additional data drives. You can save it on physical disk, CD/DVDs and UFDs.

How to create or backup System Image?