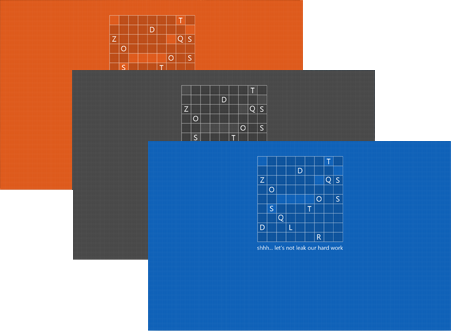 Microsoft appears to be planning first beta of next version of Windows operating system (Windows 8 or Windows vNext) later this year, sometime in Q3 of 2011. Reports say that Microsoft has already started the coding work on Windows 8 M3 on February 28th, 2011 and M3 is the last development milestone before moving to first Beta release.

Meanwhile, lots of consistent screenshot leaks of Windows 8 have debut and gave glimpse of some wallpapers, are being used in M2 and M3 builds with ironically message: shhh… let’s not leak our hard work.

We, with inferse.com adopted an idea and made yet another Windows 8 theme pack for Windows 7 called Windows 8 Glimpse. There are total 8 high-resolution (1920×1200) wallpapers are packaged with built-in sound scheme Festival and screen saver 3D Text with new Microsoft tag line Be What’s Next.

Today we are pleased to share this theme pack on Holi (It is a spring festival and celebrated by throwing colored powder and colored water at each other in India.)

We wish you enjoy this vibrant colorful theme pack, just like Holi colors. So Happy Holi to everyone and have a great time ahead.
[download]
Windows 8 Glimpse Theme pack
[/download]
Additionally you may like to try following Windows Valley theme packs for Windows 7.